The Missouri Wildlife II Mural is set on the North Wall of the upstairs section of the library.

Missouri Wildlife II is the second in a series of mural entitled Missouri Wildlife completed by artist Gary P. Lucy in 1980. The mural was made possible through the fundraising efforts of the Nu Theta Chapter of Beta Sigma Phi, Washington, Missouri and a matching funds grant from the Missouri Art Council.

Missouri Wildlife II depicts central Missouri wildlife habitat centered around the border or edge effect. This term, edge effect, is commonly used in conjunction with the boundary between natural habitats, especially forests, and disturbed or developed land. Edge effects are especially pronounced in small habitat fragments where they may extend throughout the patch. Increasing edge effect allows biodiversity to grow within the area.

The landscape is set in a split rail fence row west of Washington looking north toward the Missouri River, which can be seen in the background. The work exhibits a display of flora and fauna as well as wildlife indigenous to this setting. 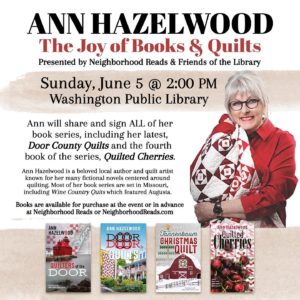